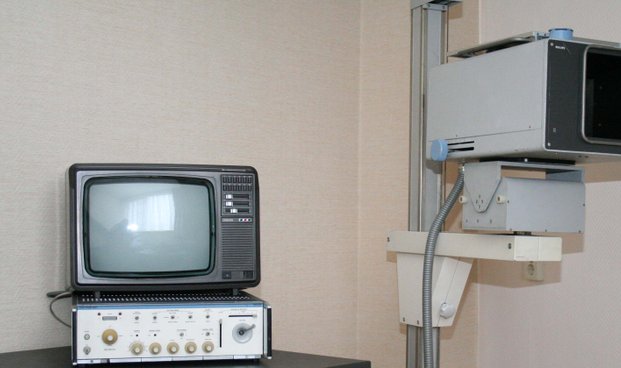 The camera weighed about 40 kilos and was developped for defense objectives by Bofors. The measuring sensor was cooled by liquid nitrogen.

Showing the unabridged articles on this site is impossible. By having an article published the author gives the rights to the publisher. The four articles mentioned here have been published by Uhlen Verlag in Vienna.

It is usual though to publish the abstract free from rights.

In case the reader wants more the publishers nowadays offer the possibility to download the whole article on payment as is also the case with Thermology International. At an indeed small payment a whole article can be downloaded. Besides , Thermology International has the possibility to see or copy all editions of the magazine appeared for 50 Euros.

At Elsevier, Wiley or Springer the cost can raise to 45 Euros per article.

Explanations, documents, datalists, everythhing that cannot be published can possibly be published on the site.How often this will be used depends on many factors. The owner of the site decides on that.

During the years 1980-1989 in a general practice in Den Helder a number of investigations has been performed using infrared thermography.

That measuring technique had been developed for a large scale screening of breast cancer. All big electronics concerns developed equipment in that time with prices varying from 150.000 till 350.000 guilders.

During that course it was demonstrated how a group of various pain complaints could be treated by a local minimum dose of local anesthetics in the skin.

In regular medical science nothing was known about the skin as a source of chronic pain at that time. There was one German publication about temperature investigations of painful spots on the skin. In 75% of the cases these appeared to be colder than their surrounding temperature.

The course theories were tested in practice and found usable. But there was no testing investigation.

Applying this technique was the same as quackery and for that reason you had to test the operating mechanism yourself.

Philips offered an infrared thermograph for this objective.

In consultation with Professor Kloosterman who wrote an article in a Dutch medical magazine about “abdominal wall pain” a few investigations which could be carried out were formulated.

Demands required to the investigations, they should not be an extra burden for the patients and the results had to be usable for the practice instantly.

1. Six volunteers were prepared to keep up with a body temperature curve. They came three times a week to have the temperature of the abdominal skin measured.

Goal: to see if the curve of the abdominal skin temperature would have the same variations as the body temperature curve. That would indicate that the function of the internal organs are being reflected on the abdominal wall.

2. Also a number of pregnant women had their abdominal skin temperature measured in order to see if possible pregnancy problems could be detected early in this way.

3. In order to examine the possibility of a connection between pain spots and some – formed by the body itself- pain-inducing substances an investigation was performed with micro doses “painkillers”.

For the regular medical science these doses matched the homeopathic concentrations, so they matched placebos (non-active medication).

4. In order to see if an increase of the blood circulation would give an improvement of the pain complaint, an investigation was performed with a means that theoretically could improve the circulation.

2. Abdominal wall pain can have something to do with processes that take or took place in the abdominal organs. Viscero-cutaneous reflex ways exist with man in vivo. P<=0.001.

3. There is a correlation between pain sensation and measure information found by infrared thermography. 1989: P=0.007 Spearman's rho: 0.3328.

5. There is a slight indication that the pain spots are influenced by the effect of prostaglandins in which case the various NSAIDs do not have a similar effect on the pain spots.

6. Pentoxyphillin has a significant positive effect on both cold and hot pain spots. P<=0.001.

7. A significant placebo effect has been found; a temperature increase at cold pain spots and a temperature decrease at hot pain spots. A possible explanation is sudden recovery in the investigation group. In that case chronic pain is not a static remainder phenomenon but a course process.

Meaning of these findings:

Chronic pain spots usually are colder than their surroundings. The difference is insufficiently to see with the naked eye. In 2014 it can only be detected by means of special measuring equipment.

A small part of the pain spots is hotter than its surroundings. No pain spots were found with an average temperature. So they are either cold or hot. That is an argument against the opinion that pain spots only exist by experience. There is something local as well. Local can have something to do with something that takes or took place in the skin or also as a result of diseases of the organs that by nerve connections to a specific area transfer reactions to that area. That transfer can be blocked by a local anesthetic.

Those reactions consist of circulation changes. The measuring equipment for this consists of a computer controlled infrared camera with processing software.

As in all other medical research equipment the use and explanation of the measuring information requires a thorough medical education.

The equipment is very sensitive, normal physiological reactions are visible on the images.

So in many cases it is very difficult to determine whether the situation measured is or is not a disease.

For influencing abdominal wall pain with a local drug there is indeed a medical pharmacological and neurophysiological base now.

In more detailed descriptions of the investigations performed and of the literature on this site things will be further substantiated. For the aficionado references to the scientifically published investigations are mentioned in the column on the right side.

Every investigation should be performed for the benefit of the cooperating patient. There should be a decent responsibility also.

This job has been done after almost fourty years by these publications.

Introduction to this site about chronic pain.

On this site a number of chapters are placed about investigations and hypothesis develooped in the period of 1981-1986. Because of various circumstances these investigations partly have not been published yet.

Those are the private opinions of the author of this site, partly tested by means of investigation and partly rendered as theoretical hypothesis.

The differences between the articles are clealy indicated.

First thosse articles are rendered of which can be expected that publication on the internet will reach the target group better than by means of the traditional physical media.

How did the underlying ideas develop in the period of 1975-1981, the start of the actual investigations?

It started with Hansen and Schliack's textbook. In this book there ws a reference to the investigation by Baumann and Uckert (1954). IT was found that spots with chronic pain had a lower skin temperature than their surroundings. Objectively and measurably. Via orthosympathic sensation and sensitisation of the spinal marrow this led to the then called “Südeckse Dystrophy”, also called “Sympathic reflex dystrophy”.

Was there a connection then?

In all four cases: pain, skin temperature, sensitisation and sympathic reflexes prostaglandins could and can play a role.

In 1977 prostaglandins were described by Hoorobin and Manku as substances that can play a crucial role in a measuring and regulation technical situation in the body.

Those situations may occur at the origin of Dystrophy(Now called CRPS).

In the first place prostaglandins were discovered in liquid of the prostate gland and play an important role in the function of the genital organs.

Combined with a clinical lesson by gynaecologist Professor Kloosterman (1966) about äbdominal wall pain”that was the reason to plan a number of investigations(in consultation with him) that did not by coincidence cover the whole gynaecological domain.

Two investigations have only recently been published in 2013 and two in 2014.