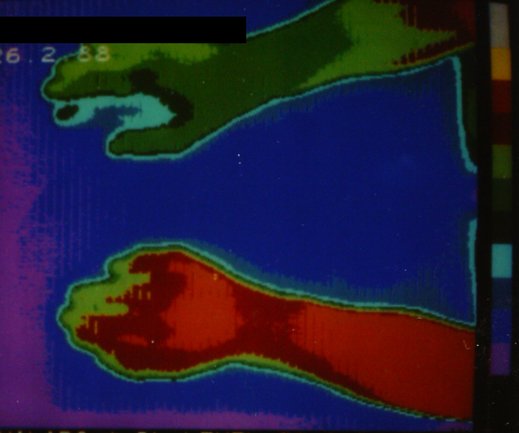 Infrared image  with (cold) pain  (green) on the right hand.

Introduction to this site on chronic pain.

On this site a number of chapters will be placed about research and hypotheses developed in the period of 1981-1986 and up till now by circumstances  not published elsewhere.

They are personal views of the author of this site, partly tested by research and partly described  as theoretical hypotheses.

The differences between the articles are clearly indicated.

First a display of those articles that reach the group better by publication on the internet than by the traditional physical media.

How did the underlying ideas develop in 1975-1981, the beginning of the actual research?

It started with the textbook by Hansen and Schliack. In this there is a reference to an investigation by Baumann and Uckert (1954). They found that chronic pain spots have lower skin temperature than their surroundings. Objective and measurable. Via orthosympathic stimulation and sensitization of the spinal marrow the track led to the then called “Südeckse Dystrophy”, also called “sympathic reflex dystrophy”.

Was there a connection?

In all four cases :pain, skin temperature, sensitization and sympathic reflexes prostaglandins could and can play a role.

In 1977 prostaglandins were described by Horrobin and Manku as substances that play a crucial role in the measuring and regulation technical situation in the body.

Those situations may occur at the origination of Dystrophy (now called CRPS).

Prostaglandins were first discovered in the liquid of the prostate gland and play an important role in the function of the genitals.

Together with the clinic lesson of gynecologist professor Kloosterman (1966) about “Abdominal Pain” this was the reason to plan some research (in consultation with him) that not just happen to extend across the gynecological field.

Starting from the idea “abdominal Pain” the research field extended to other spots of chronic pain, the assumed measuring- and diagnostic possibilities, (regulation)processes at the spot and the possible relation to the origin of Dystrophy,(CRPS)

Three articles  are accepted for publication: